The acronym BPMN stands for Business Process Model and Notation and is meant to use the word “Model” (instead of “Modeling”) to express that this language standard is more than just a notation.

The BPMN standard defines a graphical language for describing and documenting business processes and workflows. This notation can be used to specify a sequence of work steps or processes (the workflow) as well as the exchange of messages between processes and/or partners. This makes possible the modeling of complex business processes, which are coordinated/influenced both internally and externally, and which include multiple participants.

The BPMN was originally developed around process descriptions that can be executed by a Process Engine of a Business Process Management System (BPMS). However, the developers of the BPMN considered that this notation can be used to create both technical and subject-specific models, with the aim of providing a common language for both business-oriented subject matter experts and IT experts.

In practice, despite the use of a common language, the technical and technical models are fundamentally different.

Specialist models emphasize the understanding of the basic process flow and thus forego the presentation of too many details. For example, branching conditions are formulated in plain text rather than in the form of exact logical expressions, exceptions and rarely occurring (special) cases are often not modeled at all, but rather explained by annotations and descriptions.

Some of the BPMN constructs (such as looping constructs, exception handling, or transactions) can not deny their origin in the field of executable process specifications, and are more commonly used in technical models.

Against this background, when using the BPMN for functional process modeling, it is advisable to restrict the constructs to be used in advance and define them in the form of modeling conventions or guidelines.

The BPMN standard provides the Business Process Diagram for depicting a single process or the collaboration of several processes.

If the cooperation of several processes is to be represented by means of message exchange, this is a collaboration, which is also represented in a Business Process Diagram (but is usually referred to as a Collaboration Diagram).

In a Choreography Diagram, as in collaborations, the exchange of messages between different partners is shown, but every single message exchange is modeled as a separate activity, whereby loops, branches and the like can be mapped.

The Conversation Diagram is an overview of several partners with their communication relationships. 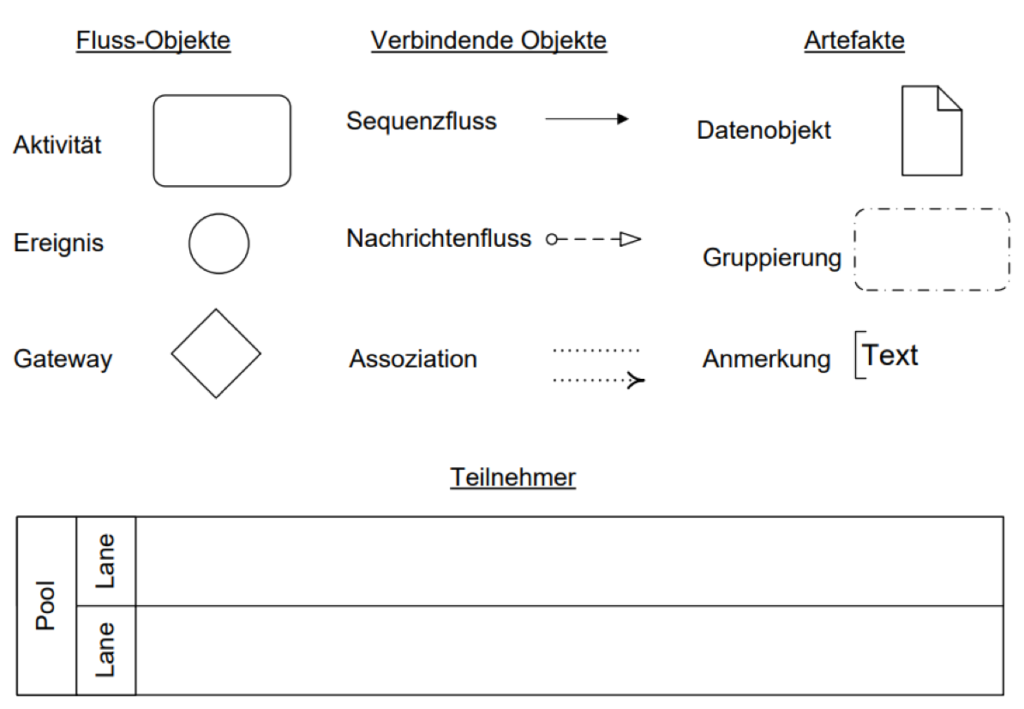 Take advantage of our training offer or
design your individual training at a place of your choice.